Unlike Ethereum where each token has its own contract, Icetea Platform manages all assets via the "Assets" system contract. Think of it as a registry of all assets. It supports well-known asset types like fungible (similar to Ethereum’s ERC-20) and non-fungible ones (similar to Ethereum’s ERC-712) out of the box. Users can easily issue one by calling a function on the Assets contract, supplying asset parameters and sufficient issuance fees. No source code is needed.

In rare cases when you want to create a custom asset, you can deploy a smart contract extending the built-in asset with custom behaviors, or create a completely new type of asset.

There is no distinction between a coin and a token. All are assets and Icetea Platform treats them the same. At the time of the mainnet launch, Icetea blockchain comes with a pre-issued asset named TEA. This asset is used for gas costs and fees. Future assets can also be used for gas cost and fees, by converting to TEA via the Exchanges system contract.

Compare to Ethereum token system, this asset system has some advantages.

Although it is possible for developers to create a token using a contract similar to that of Ethereum, doing so will exclude the token from built-in support for permission management, exchange, moving assets to sidechains, etc. Therefore, we strongly recommend using the asset system to issue and manage assets.

Smart contracts, or contracts for short, are at the heart of Icetea blockchain. Every transaction is a contract call.

Icetea blockchain supports 2 contract format: JavaScript and WebAssembly. Other languages can be compiled into either JavaScript or WebAssembly before deploying to the blockchain.

Under the hood, Icetea blockchain uses Google's V8 engine to execute contracts. V8 is currently the most powerful, advanced, and mature engine for both JavaScript and WebAssembly.

There are 2 types of contracts.

Because system contracts are part of the system, they run in-process and in the same context as the system.

USER CONTRACTS are contracts that developers upload to the blockchain. Transactional calls to these contracts need to be verified and wrapped, grouped for possible parallel execution before dispatching to a process pool for execution.

Besides contracts, one can also deploy libraries, which can be called from other libraries or contracts but cannot be called directly from clients.

The following diagram denotes what happens when you deploy a smart contract. 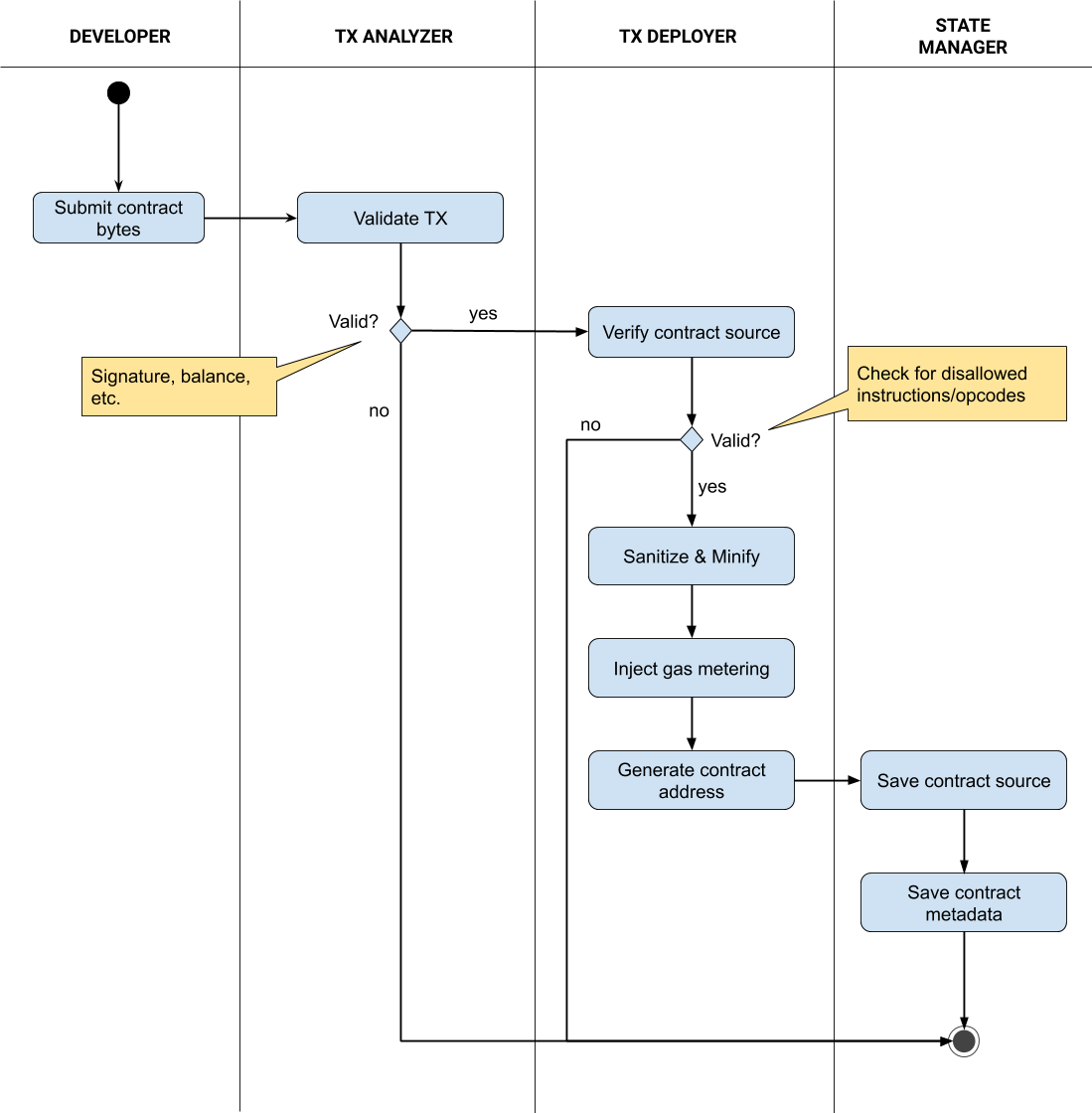 The following diagram shows the flow of a contract call that changes state. 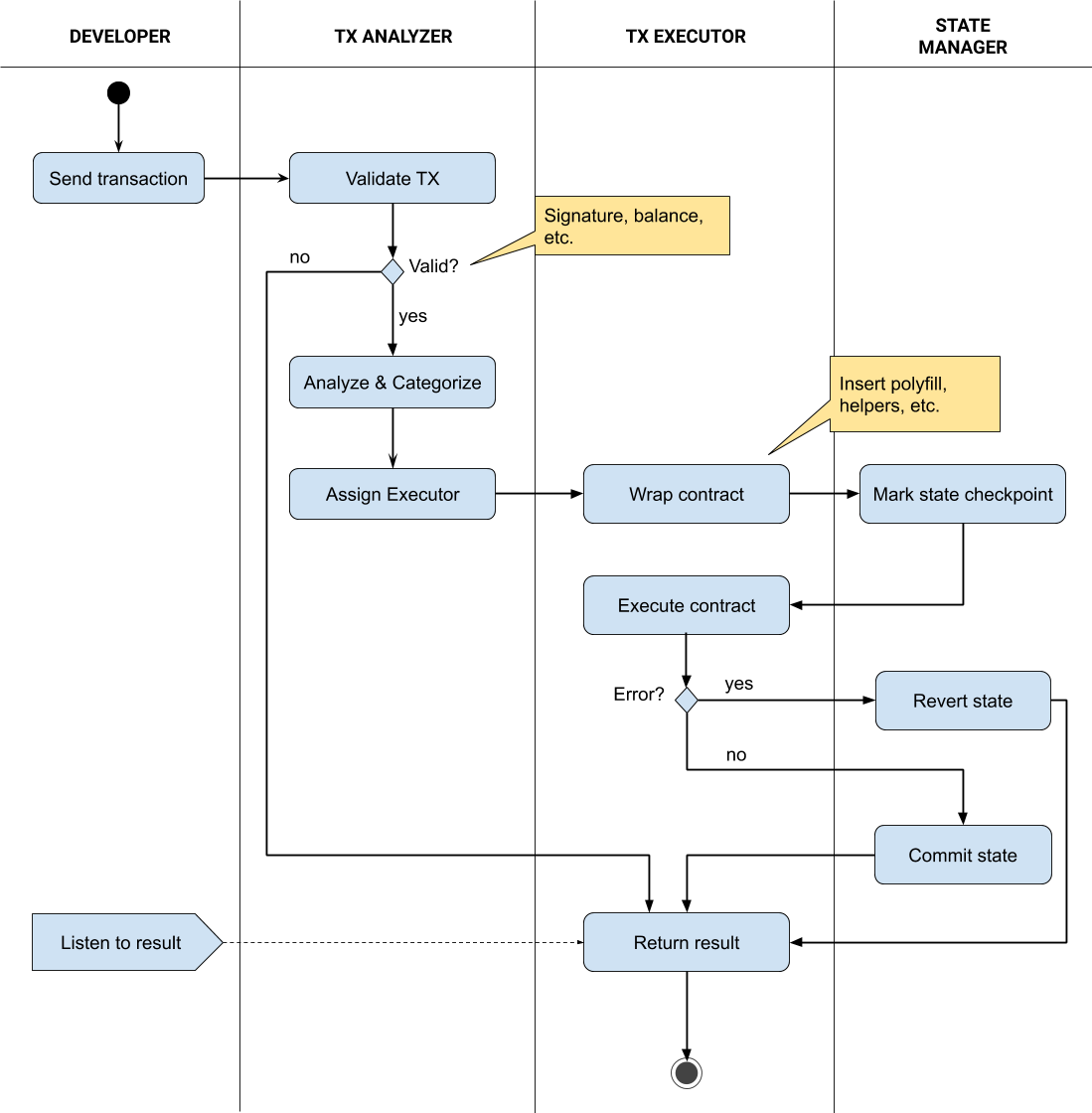 It should be noted that the blockchain cannot detect contracts that attempt to scam users. Users should interact with verified and audited dApps only.

Icetea blockchain supports versioning for both contracts and libraries. A version is an integer number, starting from zero. One can deploy an update contract or library to the same address. This will increase the version by one.

Light client support is part of the Tendermint consensus and it works seamlessly with Icetea blockchain. The strong point of Tendermint light clients is that their proofs are very succinct. While a Bitcoin light client must sync chains of block headers and find the one with the most proof of work, a Tendermint light client just needs to keep up with changes to the validator set. This makes it an ideal candidate for mobile and internet-of-things use cases.

Because Icetea blockchain uses Tendermint Core under the hood, it is trivial to connect Icetea to Cosmos Hub (opens new window). We would decide how and when to connect to it later.

Besides Cosmos, for direct cross-communication with other chains like Ethereum, EOS, Tronx, etc., corresponding 2-way bridges must be built. Icetea Blockchain’s smart contract system is capable of building this kind of bridge. Because this is not specific to Icetea blockchain, this paper will not discuss it in detail. Ones who are interested may refer to Kyber Network’s Waterloo Bridge (opens new window) and other similar solutions for reference and inspiration. The advantage is that, due to the compactness of Tendermint light client proofs, you do not need to sync Icetea block headers to the other chain, just keep track of the changes of its validator set. This makes a 2-way bridge between Icetea and chains like EOS very cost-effective.

One addition is that it is possible to utilize the Icetea's node gate network to relay information from one chain to others.

After releasing to the mainnet and running stably, the governance of Icetea blockchain will be transferred to Icetea Foundation, a non-profit organization. The governance rules of Icetea are designed with the following goals in mind:

During the childhood period (first 12 months from the mainnet release), everyone can propose but only validators vote. The voting power of a validator is the sum of its own stake and the combined stake others delegate to it. The voting period is short. Part of the validator's deposit is slashed if it does not vote in time.

After the childhood period, the blockchain enters a mature one. The voting period takes longer. Everyone can explicitly vote or delegate its stake to a validator. Changes to the blockchain are requested in the form of proposals. People must deposit a sufficient amount to back the proposal before it becomes eligible for voting.

There are 3 types of proposals:

ETH or tokens on Ethereum could be moved to Icetea blockchain using a bridge as described in the Cross-chain Communication section. The bridge could be 1-way (Ethereum to Icetea only) or 2 ways, depending on your specific use case.

Because there are Abstract Syntax Tree (AST) parsers for both Solidity and JavaScript, it is possible to write a Solidity to Javascript transpiler. The Sunseed tool supports Decorated JS, a JavaScript class structure similar to Solidity contract, so it is easier to transpile Solidity to it. A sample tool for this could be found at https://github.com/TradaTech/solidity2js (opens new window).